Mecuris GmbH, a Munich-based medical technology start-up focusing on the digitization of prostheses and orthoses, has won Denise Schindler as its brand ambassador. The Paralympic cyclist and current Vice World Champion will be the face of Mecuris for the next four years. Through this cooperation, both partners want to advance the digitalization of orthopedic technology and create public awareness that self-confident handling of a prosthesis is possible. 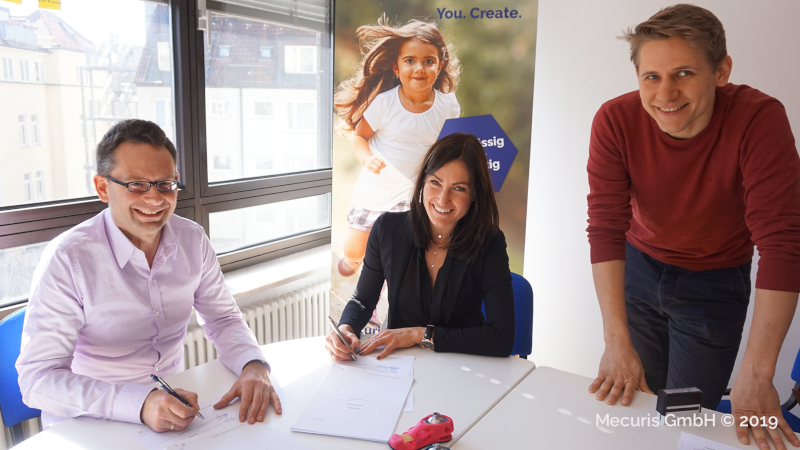 Munich, Germany / April 9th, 2019: Every person is unique and should be able to express their individuality freely. People with disabilities often hide their handicap to protect themselves and their prosthesis from prying eyes. Thanks to Mecuris, prosthetists and orthotists have easy access to 3D printing technology to create individual prostheses via the Mecuris Solution Platform. Mecuris' designs allow wearers to confidently present themselves and identify with the them. Denise Schindler lost her lower leg in an accident at the age of two. Today, she is proud of her disability. Above all, she encourages children and adolescents to accept their differences and to openly deal with it. "Denise Schindler is the perfect brand ambassador for Mecuris. As a successful para-athlete, she is a role model for many people with disabilities. We are very pleased to have won her over to make our philosophy and products better known," says Manuel Opitz, CEO of Mecuris. "We want to give wearers the opportunity to express their own personality, to transform their aids into a fashion statement and thus, put them in the right light instead of hiding them in the shadows," explains Opitz.

Denise Schindler was the first female para-cyclist in history to start with a 3D-printed prosthesis at the Paralympics in Rio. Together with Mecuris, she would like to pass on her positive experiences with digital prosthesis technology to all CPOs. "I want to convince CPOs that digitalization offers a great opportunity for the future. At the same time, I'm helping to reduce fears of contact with this new technology," explains Schindler. "Mecuris is a great partner for this. Their online platform is groundbreaking. Without any previous technical qualifications, my CPO is now able to digitally tailor orthopedic aids and design them according to my design wishes. He doesn't have to worry about suitable print parameters or quality specifications. Mecuris takes care of that. In other words, he is gaining opportunities in the digital workshop to which he has not had access before," says Schindler.

The strategic cooperation between Denise Schindler and Mecuris has been agreed for a period of four years. In addition to know-how transfer and appearances as brand ambassadors, it also includes the provision of prosthetic components to Schindler. The athlete will receive the waterproof components Mecuris NexStep and a prosthetic cover for swimming. She also receives individually designed covers for her everyday prosthesis. Schindler wore the first designer piece "A Night Out" at the German Sports Journalist Award ceremony in Hamburg on March 25, 2019. The cooperation was initiated by Denise Schindler's manager, Dirk Limburg, owner of the agency PeoplesProfile.

Mecuris teams up with certified prosthetists and orthotists (CPOs) to move orthopaedic care into the digital age. Bringing together 3D technologies into one intuitive Mecuris Solution Platform the company found a way to simplify the CPOs work and transform the way to design and use orthopaedic devices. Mecuris enriches wearers' lives by enabling medical professionals to design their product ideas on our intuitive digital platform - without any CAD design knowledge. This means patients can quickly regain their mobility, show their individuality and become active again faster. Thanks to full CE-mark and ISO certification, Mecuris' products meet the highest safety standards and are reimbursed by all health insurance funds in Germany.

When she was two years old, Denise Schindler came under a tram in Chemnitz. Her right lower leg had to be amputated. Schindler has been active as a performance cyclist since 2011, became World Champion in road racing the following year and won the overall World Cup classification. In 2012, she won the World Cup again and won the silver medal in road racing at the Summer Paralympics in London. In 2016, Schindler won two silver medals at the track world championships. Most recently, at the Paralympic Games in Rio, she won the silver medal in time trials on the road and the bronze medal in road racing, as well as silver and bronze at the 2017 Road World Championships in Pietermaritzburg. At the Paracycling World Championship 2018 in Rio de Janeiro, the 33-year-old from Olching/Munich not only won the long-awaited gold medal in her top discipline, the 3,000-meter pursuit, but also two silver medals in the scratch and 500-meter time trial. Schindler is currently Vice World Champion on the track in the 3,000-meter pursuit.

Vesalius Biocapital (Vesalius), the specialist life sciences venture capital investor, has supported companies active in human health through venture capital funds since 2007. Since inception, Vesalius has raised over €260 million in three funds and contributed to the development of over 25 companies. The investment portfolio is well balanced between drug development and non-drug development investments and committed to providing capital to science-backed innovation and ambitious entrepreneurs, with a strong focus on an exit within five years.